We’ve already covered the importance of ditching your inbox first thing in the morning in order to see more success, but what’s next?

We now would like to take a look at something much smaller that could be inhibiting your impression on management and coworkers in the workplace—Your Smartphone. 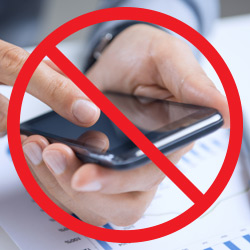 We’re not saying to break out your Motorola RAZR and cancel your data plan, but it’s becoming more and more important to stop bringing your smartphone to meetings and even offsite lunches.  Why?

New research from USC’s Marshall School of Business asked 554 full-time working professionals earning above $30K and working in companies with at least 50 employees.  Researchers asked a variety of questions about smartphone use during meetings and found:

The ironic point is that the lowest people on their respective totem poles found the habit acceptable.  These same people who rely on the opinions of those older than them for promotion, increased pay, and even job security.

Why? Respect, Awareness, Attention (Among others)

You may be saying, “Meetings are pointless and a waste of the time I spend here.” This may be true, but understanding and adapting to a culture is the only way you can move up.  Consider why it makes you look less professional. When you take out your phone it shows a:

Save the Phone for the Lunch Break

Albeit, these seem like common sense, but especially for individuals looking to move up in a company, ditching the phone during meetings will do wonders for impressions on coworkers.

Some of the most successful even have cleared their apps. Consider Mark Cuban, who admits to only having 13 Apps on his phone, including many you wouldn’t expect.  Business Insider shares those applications on his phone.

So is there a correlation between fewer apps and more success? We wouldn’t go that far, but we do recommend that you set down the phone and pay attention to who’s speaking in the meeting.

Related: 4 Roles of the Modern CFO

The Overture Group cares about helping you find the right workers that will offer success to your company.  We welcome you to download our Talent Acquisition: a Road Map for Success whitepaper, and contact us to better achieve your recruiting goals.